Get to know Jenn Smurr, Founder of Born & Bread 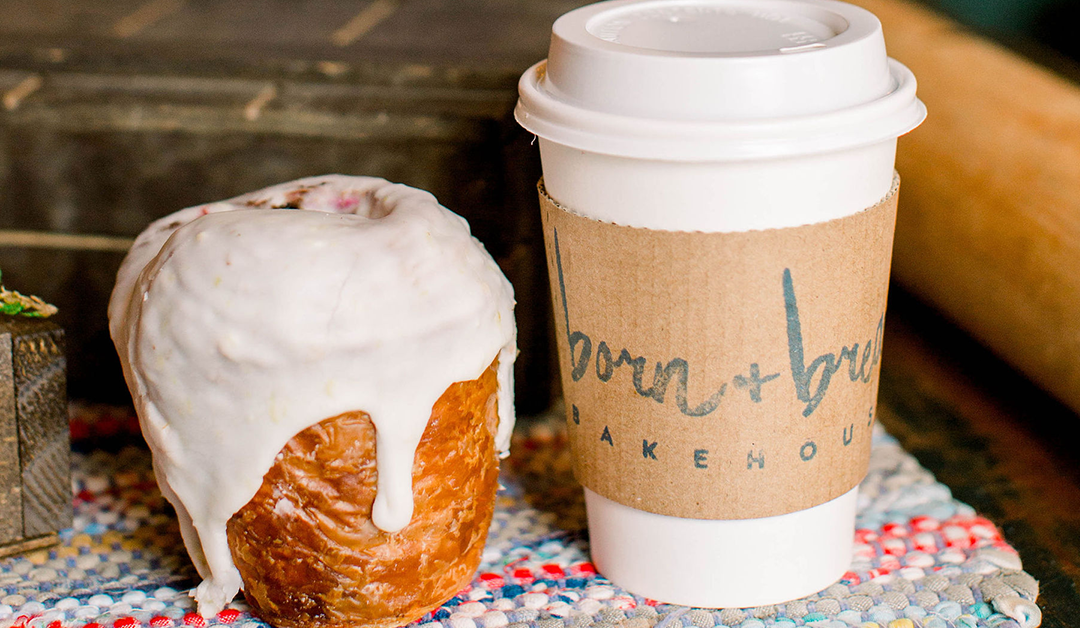 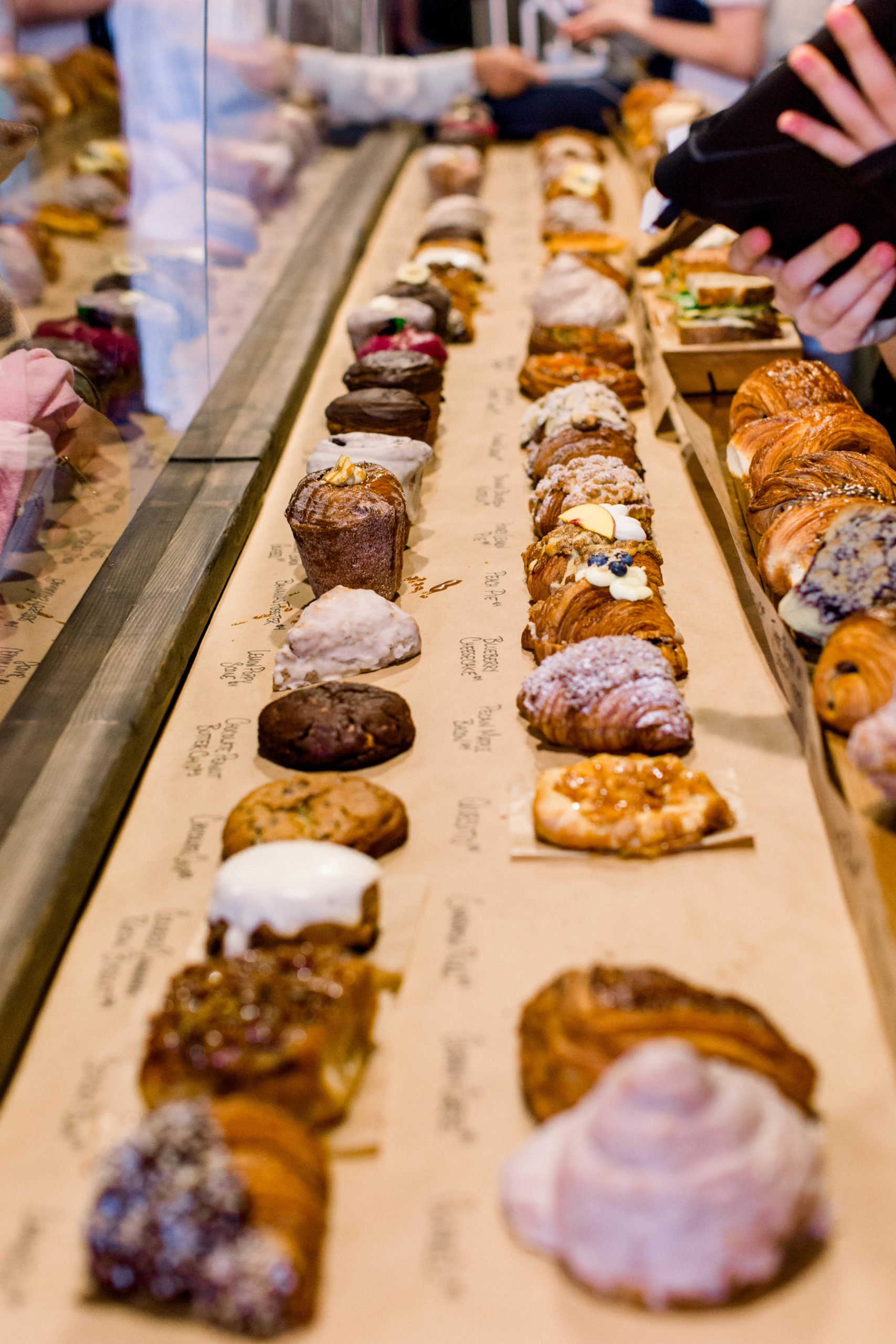 We love to partner with coffee shops who make it a priority to elevate coffee and craft a spectacular experience in every cup, but we are equally excited by businesses who put as much thought and care into the coffee that they serve as they do to the rest of their core business. Those who believe that a restaurant, bakery, or progressive office space should have amazing coffee – whether or not that is their bread and butter. Born & Bread does just that. If you live in Florida you’ve likely heard of the famous cruffin available only two days a week on S. Florida Ave. But what the average person may not know is that Born & Bread puts just as much thought into crafting their cold brew offerings as they do the rest of their food menu. From their Caramel Chai cold brew to their Mint to Be cold brew (made with fresh mint), they’re always mixing it up to keep things fresh and interesting.

We love to partner with Born & Bread because we share such similar philosophies – to know where your food and beverages come from, to ensure that your community is supported, to challenge the status quo, to preserve the integrity of simple, but real, ingredients, and to revive the spirit of a craft in a way that can change and invigorate the landscape of an entire community.

If you want to learn more about the Bakehouse, check out some of their features here, here, and here.

We sat down with Born & Bread Bakehouse owner, Jenn Smurr, for an exclusive interview to get to know the REAL mind behind the cruffin. 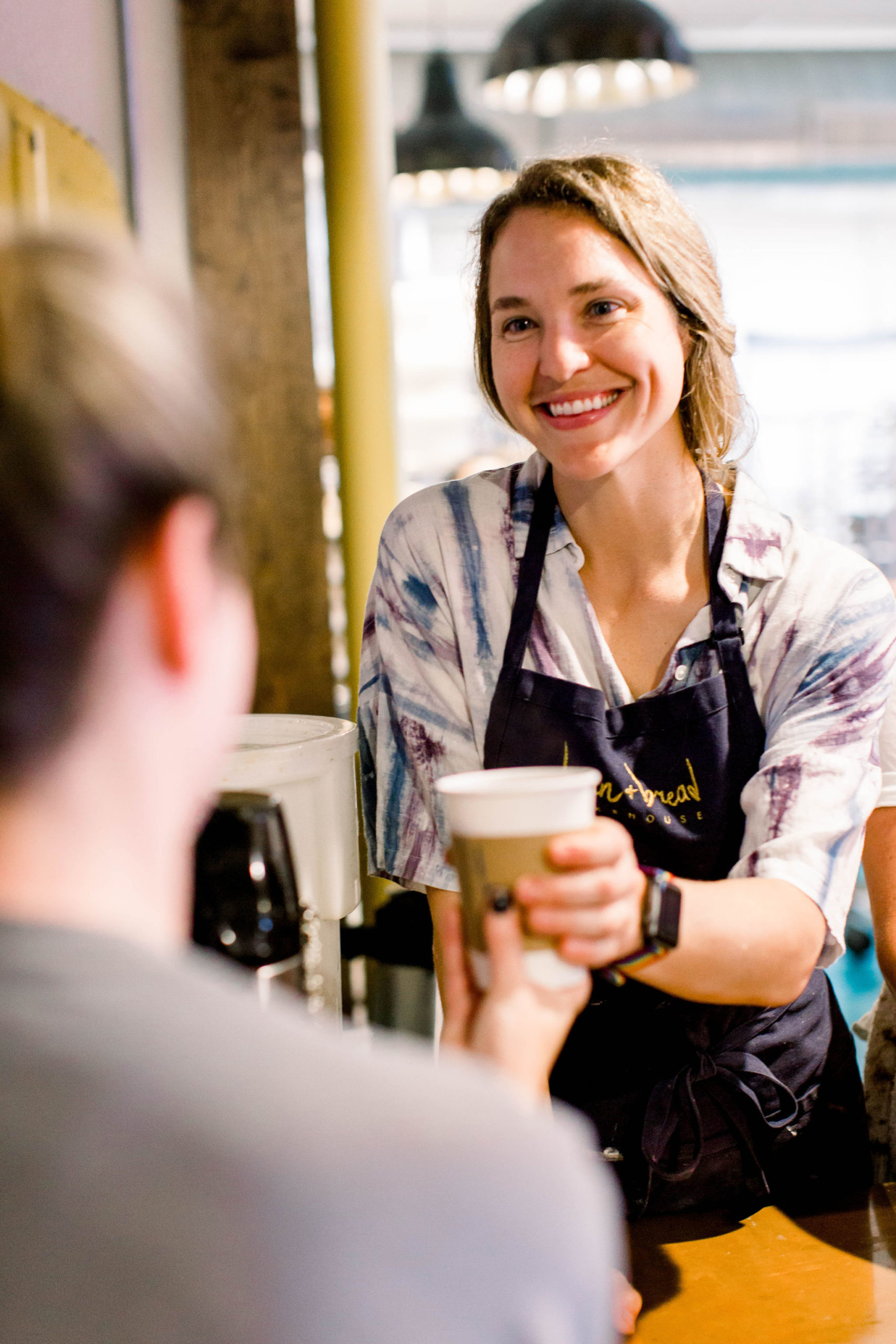 Patriot Coffee: It’s been said that Born & Bread is the best bakery in the United States. What are your thoughts?

Jenn: Oh, man. I’m incredibly proud of what we do and that would be an incredible honor. But there are so many bakeries that, I feel, do so much more in terms of what they are creating and the experiences that they offer. I think as a baker, it would be really difficult to say, any day, that you’ve created something that is the best. I don’t think that you go into anything like the craft of baking or the craft of coffee, thinking “I made it”. It’s a lifelong journey. It’s a daily, weekly, monthly, yearly practice. And so, in this whole scheme of being the “best”, I think that you’re going to have to look at what you’re doing on a daily basis and continue to keep going. There’s got to be a way to make it better.

Patriot Coffee: What’s it like having such a successful business and only having to work two days a week?

Jenn: (laughing) So, since the start of Born & Bread, there were very few weeks where we only worked five days. Even growing the team, it was almost from the beginning that it was already a six-day process. And that would be from just thinking about how much you could do as just one person – a croissant dough taking three days, figuring out how to make every filling, every pastry cream, every jam, every bread, literally everything that is on the menu is made from scratch. And so, those things take time. Good things take time. And we are currently at seven days a week, which I never thought that we ever would be. I actually feel like I work eight days a week, and I don’t know how that’s possible. But I wish I only worked two.

Patriot Coffee: You have a devoted fan base. I’ve seen customers brave heavy rain, intense heat, and even risk life and limb crossing South Florida Ave (one person got hit by a car). Is there anything they wouldn’t endure to get their Born & Bread fix?

Jenn: Oh man, I can’t speak for them. I’ve done some pretty crazy things, myself, so I love being on the customer side of going to a place that has a crazy long line – that excitement of being in a different city and thinking  “I’ve never done this before” and “There must be a reason why it’s this good”. What would I not be willing to do? I think it would have to be like…I mean…even during the hurricane people were outside, it was like one of our longest lines. So, I think if it were maybe hailing outside. But how big would the hail have to be? Or maybe if Florida somehow had an earthquake. Or if a volcano erupted. Yeah, we have an incredible customer base. They love us so much, and we love them. My mom was actually saying on Saturday that a couple of times customers walked in and said something like “I just don’t understand how you all make us feel so wanted.” And I love hearing that. Our team is just so dedicated to our customers, and our customers to us. It’s the best kind of relationship.

Patriot Coffee: If a cruffin was a Star Wars character, which would it be and why?

Jenn: We have a team member that when we cut our croissants, they say the shape of it looks like Yoda. So I would first want to say Yoda, but then it’s not aged enough, right? Because a cruffin is something newer. Yoda deserves to be this traditional croissant. I think a cruffin would have to be, I mean, maybe R2D2. Yeah, it kinda looks like him.

Patriot Coffee: With the success of the croissant / muffin mash-up, are you considering other pastry marriages? The crookie perhaps? It’s like a croissant and cookie had a baby? What do you think?

Jenn: I actually had a dream last week that there was, like, a Craco. Croico? It was a Cra-taco. And basically what I did was I took one of the – in my dream, not in real life, but in my dream – I took this metal taco stand, and then I had placed something in between and I kind of cut a circle out of a croissant, and I made it into a taco. And yeah, we made cra-tacos.

Patriot Coffee: Have you executed this yet?

Jenn: Not yet. But I think it’s doable.

Jenn: I think a cra-taco is for sure doable. Okay. Watch out swan cruffin, cra-taco is on the way. (laughs)

Patriot Coffee: But seriously, you are constantly innovating to keep things exciting. What has been the biggest flop that never made it to the Saturday bake.

Jenn: Most disgusting. They would hate me for this, but we had some apprentices from Switzerland who were just dedicated for three months to finding the savory cruffin. And we had a LOT of savory cruffin fails. One, in particular, had blue cheese – and I love blue cheese – but there was something about the mixture of the blue cheese with the herbs and the bacon. Like I’m not sure if they just…I’m not…I mean…I don’t know what happened, but that was just a pretty big fail. And so, we have not succeeded at a savory cruffin yet. Sorry boys, yeah, RIP.

Patriot Coffee: When I think of the baking industry, strong women like Little Debbie and Sara Lee, have become legendary icons who have paved the way for future women. What do you hope your legacy will be?

Jenn: I’ve never been asked this question before. There is a rumor that we actually do not make all of our croissants from scratch. That, in fact, we have overloaded the dumpster several times with canned croissant dough. And so, I just hope that no one ever finds out that that is who we really are. That I am the Pilsbury dough GIRL.

But seriously, a legacy? That’s deep. I don’t know. Could I come up with a legacy for myself?

Patriot Coffee: If the Born & Bread team had a theme song, what would it be?

Jenn: Uh, oh man. They are such Poptarts, the entire team LOVES pop music, so it would have to be something poppy. I would like to think Michael Jackson would do it, but then there are too many young people on our team and when you “heehee” along they are like ”what?”

I think it would have to be “Hooked on a Feeling” by Blue Suede. It started as a way to get through a holiday bake, because we’ll often start at like 7pm the night before, and so every hour on the hour we celebrate conquering that hour by playing the theme song for that hour. And this was the first time we had ever done it, was with this song. And we have so many team members that are still around from last Thanksgiving. And so, even when we change it, it’s always like every third time, or every hour, or every once in a while, we will play this one. And I think it’ll always be like the legacy for those bakes.

Patriot Coffee: What is your most used emoji?

Jenn: The yellow three stars. Yeah, I would say the three little stars, I just love them. They make me think of nighttime, they make me think of sentimental things, they’re very moody. I don’t know, it’s deep. It’s relevant. Those stars are always around. And there’s more than just one, so it’s like, you know, we’re all together in the stars.

Patriot Coffee: Okay we have one more question and then we have a lightning round.

Patriot Coffee: Okay, serious one. People often say Patriot Coffee is the best coffee in the world. Unparalleled, I think, is the word most used to describe it. What do you think?

Jenn: (laughing) It is, truly, and honestly, MY favorite coffee.

Patriot Coffee: Okay let’s just leave it at that. No need to elaborate any more. No caveats.

Alright, lightning round. Now the way this will work is I’m going to give you two choices and you just pick one, and we need to do this quickly.

Patriot Coffee: You cannot think about it.

Jenn: KOBE BRYANT. Oh my God, that’s too soon. I would have said something else if it was anyone else. (laughs) My answer would have honestly been different. Shaquille O’Neal or Kobe Steakhouse? Kobe Steakhouse.

Patriot Coffee: Alright finally, what’s next for Born & Bread? You gotta give us something juicy.

Jenn: I don’t know. We’re thinking about a sister company… 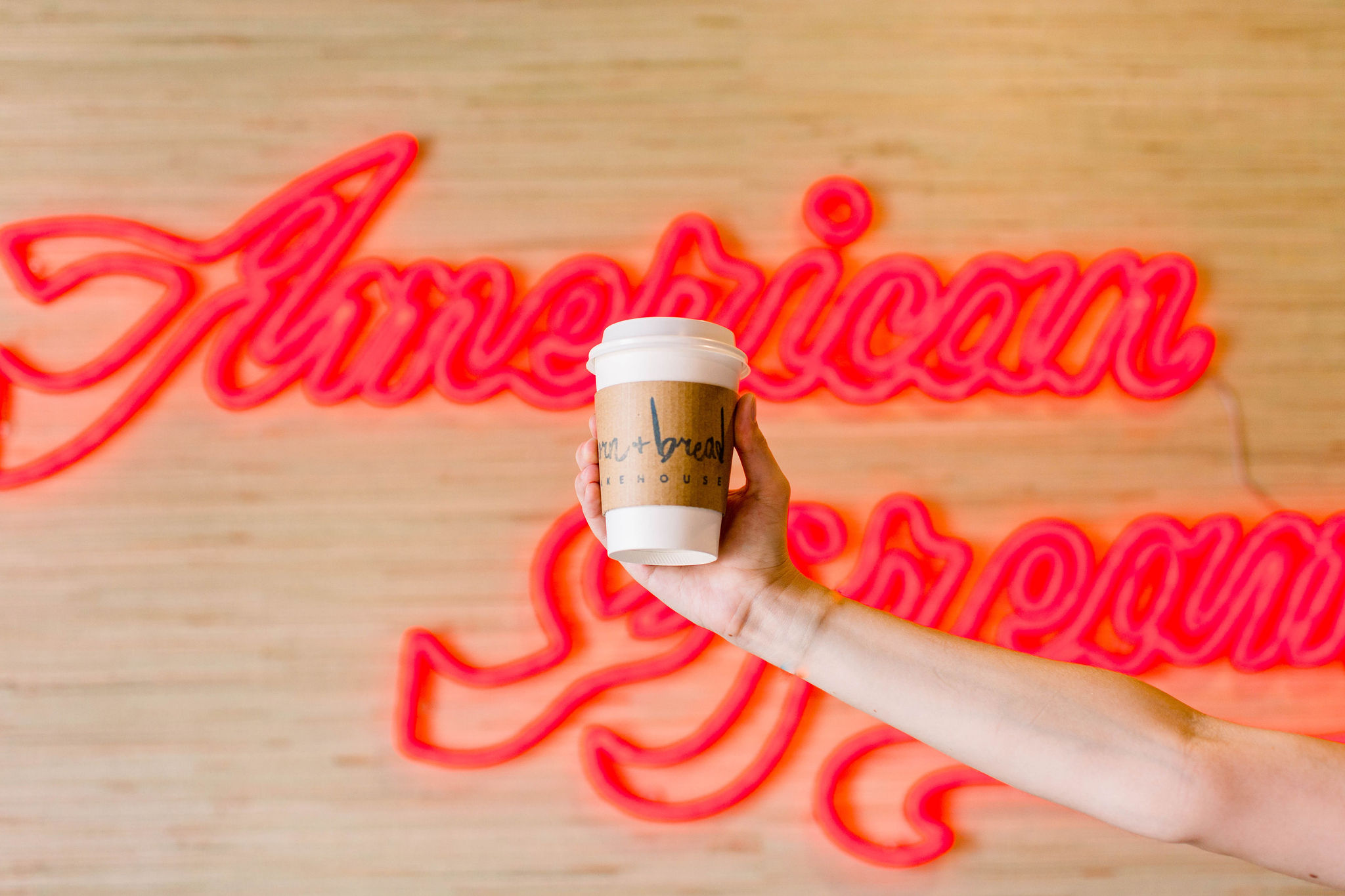 Thanks for taking the time to chat with us, Jenn!